Although infrared heat saunas are not as well-known as traditional saunas, they have been around for longer than you might imagine. Initial technology was developed in Japan in the 1960s, and since then both the science and prevalence of infrared saunas have evolved dramatically.

The overriding point of a sauna is to generate a high temperature which in turn induces sweating from the body. This cleanses your skin and pores, and allows your body to expel toxins out of your system. The major difference between a traditional sauna and an infrared heat sauna is the way the heat is generated, and therefore the benefits they both afford. Instead of using a conventional heater (and normally generating steam) to elevate the air temperature within the sauna, an infrared sauna uses infrared heaters to increase temperature directly within the body.

Why Is The Heat Source So Important? 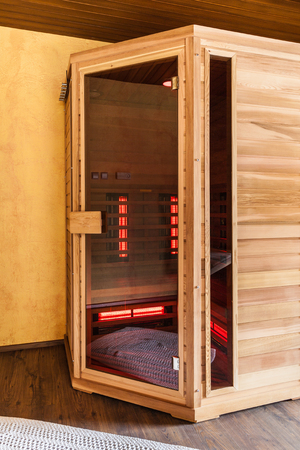 Although you might imagine that all heat is the same, the way in which high temperatures are generated does have a significant impact on the body’s response.

However, this kind of heat only affects your body superficially. The hot air comes into contact with your skin (i.e. the outside of your body), and causes you to sweat as a reaction against the heat - but the heat doesn’t penetrate much further than that. So, although you are sweating, that’s about as far as the benefits of a traditional sauna go. Also, this kind of ‘dry’ heat and high air temperature in a traditional sauna can cause considerable discomfort for some people, including difficulty breathing and feelings of claustrophobia and nausea.

As infrared heat saunas aren’t designed to raise the air temperature, they work in a different way. The infrared heat penetrates much more deeply into the body tissue, so heat is generated directly inside your body rather than outside it in the hot air. As a result, it’s not just the superficial benefits of sweating that you experience; in an infrared heat sauna your muscles, joints and circulation benefit too. The process of raising your body’s internal temperature instead of raising the temperature of the air around you also removes the external stresses placed on the body by the unnaturally high air temperature in a traditional sauna.

In essence, an infrared heat sauna allows you to experience all of the beneficial effects of sweating, as well as greater health benefits within your whole body, without enduring the discomfort of extremely hot surroundings.

But Do Infrared Heat Saunas Still Make You Sweat As Much?

Absolutely! You may be skeptical, but it’s been proven that an infrared heat sauna will make you sweat just as much as a traditional sauna - despite not being in such an ‘obviously’ hot environment.

And in fact, another major difference between a traditional and an infrared sauna is that you can leave the door of an infrared sauna open to allow fresh air to circulate. This makes the sauna experience itself much more comfortable, and doesn’t cause any kind of reduction in sweating or any lessening of the benefits of the heat therapy itself.

There’s absolutely no need to worry that you’ll sweat less in an infrared sauna - it’s quite the opposite! Because infrared heat penetrates deep into your body, it heats you up rapidly from the inside - regardless of the surrounding air temperature. You’ll be amazed at just how quickly and profusely you start to sweat!

While infrared saunas offer more comprehensive health benefits than traditional saunas, they also have several key practical advantages that give them the edge over their more well-known counterparts.

Primarily, from an equipment point of view, infrared heat saunas are much easier to manage than traditional saunas. An infrared heater is much less intrusive than a conventional heater; traditional saunas often require the generation of steam which can impact on the area around the sauna itself and create problems like mold and damp.

Infrared saunas, meanwhile, don’t require any steam at all, and they produce less external heat meaning that they can be easily installed anywhere within the home without causing any damage to surrounding areas or affecting the room temperature itself. Many people choose to install an infrared sauna in their spare bedroom… and you couldn’t quite imagine having a traditional steam generating sauna in the same place! Fundamentally, the way traditional saunas function means that overall they’re significantly less flexible in terms of where and how they can be installed and operated.

Infrared saunas also take much less time to reach the required temperature than traditional saunas. Some models are even ready to use as soon as you switch them on, so there’s no need to hang around waiting for ages before you can actually get in. Infrared heat saunas are also more economical in terms of the electricity they require, meaning your bills won’t be as high as they would with a traditional sauna.

That is of course up to you to decide. But, when you compare the two, it seems clear that an infrared heat sauna may be the better choice for some people. It achieves the same goal as a traditional sauna - but it goes so much further because it offers a far greater number of health benefits, and in a much more comfortable environment. The equipment itself is more manageable, economical and perfectly suitable for home use. While traditional saunas will of course always have their place, we’re not likely to start seeing them being installed in private homes on quite the same scale as their infrared cousins!