What Wien's Law of Displacement Means for Infrared Saunas

You may have seen these two types of infrared mentioned in articles on our site, or you might have seen them referred to elsewhere. If you've been curious about the technical differences between them, fasten your seat belt, because this particular article will get into Wien's Law and what it means for infrared saunas. Although I’ll try to explain things as plainly as possible, expect some technical areas - it is physics, after all.

You probably already know that infrared energy is a radiant heat which warms your body directly instead of warming the air surrounding you. That's why a session inside an infrared sauna is much more comfortable than one inside a hot, steamy conventional sauna. Your skin is warmed, but the air you're breathing is not. But, you might be asking, what does this admittedly basic infrared sauna information have to do with Wien's Law?

Well, in order to truly understand the difference between far infrared and near infrared sauna heaters, we need to examine what Wien's Law (formally called Wien's Displacement Law) teaches. Wilhelm Wien, a German physicist, was the first scientist to study thermal radiation in depth. In 1893, he derived the thermodynamic principle that bears his name.

where λmax represents the peak wavelength, T is the black body's absolute temperature and b is equal to Wien's displacement constant, which is the number 2.8977685 (2898 microns).

Under Wien's Law, the wavelength of the peak of emission of a black body will be equal to 2898 microns divided by the temperature of the black body in kelvins (K). Therefore, the wavelength for maximal thermal radiation power can be calculated by dividing Wien's displacement constant (2.8977685 or 2898 microns) by the temperature as measured in kelvins.

As simply put as possible, Wien's Law states that the wavelength of the energy emitted by a source is inversely proportional to the temperature of the source. In other words, there is an inverse relationship between the wavelength of the peak of emission of a black body (a theoretically ideal object which is both a perfect emitter of electromagnetic radiation and a body that absorbs all incident electromagnetic radiation) and its temperature. The higher the object's temperature, the shorter the wavelengths will be at which it emits most of its thermal radiation. 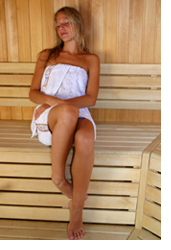 Infrared energy (including near and far) is categorized into different regions of the electromagnetic spectrum, based upon its wavelength:

Heat always tries to distribute itself as evenly as possible, and a larger infrared heater has more surface area than a smaller heater. Because the heat produced by a larger heater will be distributed over a larger surface area, the overall surface temperature will be lower than that of a smaller heater (where the heat is concentrated on a smaller surface). And here, finally, is the bottom line regarding what Wien's Law means for infrared saunas: infrared heaters with lower surface temperatures will produce more far infrared energy.